If you visited any music studio or music party there you would supposed to see the digital piano or keyboard any of it should come under the brand that is either Casio or Yamaha. Have you ever wonder which one is better over other? If you have a chance to ask this question to your friend who has any of these instrument.

They would mostly answer that what they has is the best. It is because, they are very tough to tell which one is better over other.

But, still in this article we are going to give you the broad vision of these two instruments from that you pick which one of these is best for your need.

Thinking about choice Yamaha ranges has wide number of product whereas Casio has very few varieties. Yamaha’s music instrument functionality is huge, and they provide many varieties of instruments but Casio only struck on Pianos and keyboard items.

Along with digital pianos Yamaha manufacture other musical instruments, workstations, headphones, and recording or studio gear. But, Casio doesn’t have many range while comparing with Yamaha.

Even though it won’t reduce the name of Casio on the top list, because each product from Casio speaks a lot about a strong functionality and premium sound quality. Again, more doesn’t stand always best.

Apparently there is no can be replace the Privia series has more sophisticated and premium quality in their classic lookalike digital pianos. You can’t say neither of them lacks something from other still picking either one from these two requires a maximum challenge.

Which one feels great while play? It is the necessary one you should know before buying a digital piano or keyboard. Because it will determine how long you can spent on it, how long you wouldn’t look for a replacement, and how well it produces the sound?

Some might expect their new digital piano or keyboard should give the feel of their old acoustic piano. If you deeply look on keyboards which come with Velocity sensitive that is, it can produce a loud sound according to how hard you press over the keys.

In other hand digital piano works on “hammer action” which is the core formula of classic pianos. Your quest will bring you on front of either Casio or Yamaha. But picking one from these two will be a hard job.

Yamaha offers flexible sensitivity adjustment though both give away the same feel. You can’t differentiate one from other at least on their equivalent range of products. You should try them on your hand before paying the bill.

Do you think that we can be able to spend a day without technology? To be honest the answer is no. so, can’t we go without discussing the technology of the product especially it comes to digital piano or keyboards. Before knowing the best technology and digital functionality, we should get to know the bitter truth about the cost.

If you spend more money on Casio’s expensive digital piano or keyboard they are come with high quality and great software and features while comparing with the inexpensive Yamaha’s collections. But if we generally speaks on their price with technology both will look alike.

Thinking about connectivity both are come with MIDI compatibility, USB connectivity, and ability to use headphone. So you can’t say one is better over other in this sense.

Casio made a marvelous mission while looking for the great effects. Casio has reverb, choruses and other effects which adds additional effect to your playing and top of all Casio makes it at very low cost while comparing with Yamaha.

Yamaha playing the major role in learning with their Yamaha Educational Suite. With that any inexperienced person can reach the advanced level.

Our generation facing a hard time, so spending blindly over something will fire back on you. You should think twice before spending your money on something, which should value your money. Yamaha is more famous, however it can’t beat the low price of Casio’s product. You suppose to pay more than it’s requirement just for it’s name sake. Spending more doesn’t mean you are getting the best one.

None can give you the answer for your question. For a neutral view, both have their good side and bad side equally.

Yamaha offers more range, more items, and an incredible sound outlet. Whereas Casio provides good level of functionality, a library of sounds everything on right prices.  But choosing the right one of your need is important. 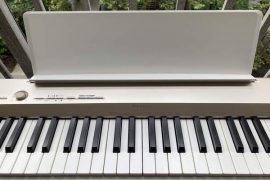 How Playing The Piano Affects The Brain