This Casio PX-130 review will look at how the PX-130 stacks up to other models at this price point. Casio is well known for being one of the first companies to create a portable keyboard that was inexpensive.

Casio Started attracting people by producing Digital piano keyboards at a low cost. In the early ’90s, Casio was not an option for Advanced players. Casio is meant only for children and beginners. People had fixed their minds about Casio as a toy manufacturing company and the piano is only for kids for playing purposes not helpful for professional musicians.

Casio stands apart from other models with its features and low cost. Suitable for the person looking for an inexpensive digital piano. Though  Casio models were lagged in people’s perception let us see how Casio Privia PX-130  is breaking the public views.

User-friendly piano and suitable for many players who were started learning the piano.

Let’s dive into the features of Casio Privia PX-130.

Here is What We Found

Whoever purchased Casio Privia PX-130, they were very surprised with its features and playability. We couldn’t find this kind of piano with real weighted hammer keyboard action at this price point.  Casio Privia PX-130 achieved its success by grading its keys. The transition from Acoustic pianos to Digital pianos will be very easy with the help of Casio Privia PX-130.

There were enough features to enjoy the music of the piano. It won’t complicate the user like other over featured digital pianos. This offers better balance to the user. Casio Privia PX-130 can be used as a practice Digital piano.

People with Casio Privia PX-130 are fully satisfied with its quality and very happy to play for its best sounding. We couldn’t find any mistakes with its sound.

Areas In Which Improvements Are Needed

At this cost, we can’t expect any other features but if the below features were included in the next releases it will be more helpful .

It will be great if the above features were included in future releases.

“DON’T JUDGE A BOOK BY ITS COVER.

DON’T JUDGE CASIO BY  ITS PRICE.”

When Casio started producing plastic keyboards in the early 1990s for attracting children at low cost, People started believing that Casio is made only for kids and beginners. After years Casio break out that was not true. Thanks to Casio Privia PX-130, which is a wonderful Digital piano at the lowest price point. 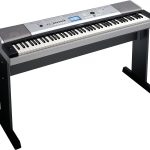 Kawai CE220 Review – Is it a real masterpiece?